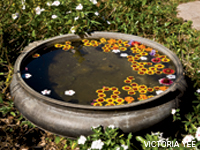 Yogis reforest the globe, one donation at a time.

Yoga-related businesses are putting their formidable positive energy toward giving back—to the earth, that is. Jade Yoga, Shiva Rea‘s Yoga Trance Dance, and the Yoga Center in Carlsbad, California, are among a handful of companies and studios that contribute to reforestation efforts in some of the most needy regions on the planet.

“Trees are part of the lifeblood of our industry,” says Dean Jerrehian, president of Jade Yoga, which manufactures PVC-free yoga mats from rubber trees. Jerrehian, a former lawyer for the Environmental Protection Agency, explains that he decided to plant a tree for every mat sold. Through a partnership with Trees for the Future, Jade Yoga has planted more than 20,000 trees since the initiative launched in 2006.

Shiva Rea is also a big fan of Trees for the Future. Her Yoga Trance Dance program has supported the group’s planting of approximately 300,000 trees, and Rea has pledged to support the planting of around 1 million more in 200 villages, mostly in southern India. She invites yogis to join “community pods” that will each sponsor one village. “I’m attracted by the people-to-people grassroots dimension of Trees for the Future,” says Rea, who donates 100 percent of the revenue generated by the Trance Dances she leads to the organization’s reforestation efforts.

Trees for the Future—which has planted more than 50 million trees since 1988—doesn’t simply plant trees and decamp. Throughout impoverished areas of Central America, Africa, and Asia, it also teaches communities about sustainable agroforestry practices, investing local people in their own environmental welfare. For example, community members learn how to use the trees’ foliage for food, wood for fuel, and roots to mitigate soil erosion.

With 10 trees planted for every $1 donated, the benefits of contributing to Trees for the Future are tangible, an aspect that appeals to its supporters. Eden Goldman, director of the annual charity yoga festival Karmapalooza, which gave all of its 2007 proceeds to the nonprofit, sums up its appeal: “You know exactly what you’re getting when you donate money to Trees for the Future.”