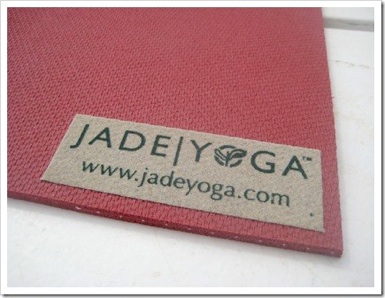 JadeYoga is a company with a rather unlikely story about how they found their zen and started making yoga mats. Originally in the  business of making the rubber non-skid mats that go under rugs, JadeYoga was born when that rubber was discovered to create some of the most amazing yoga mats. In business since 2002, and with such high profile devotees as Baron Baptiste (who sort of invented power yoga!) these mats have a lot of fans.

So does this all natural rubber live up to the hype? We put this mat through the ringer and we were surprised with the results.

This is our only yoga mat review this week that has a mat entirely made of natural rubber. I had never used a mat made of rubber before so this was a new experience for me.

At a middle of the road 4.5 lbs, the JadeYoga Harmony Yoga mat is easily portable to and from classes and I won’t hesitate to take it travelling either. The neat thing with a rubber mat, it’s super flexible so the mat rolls very tight for storage and then pops right back our for class without a lot of end rolling up issues. The flexibility further added to it’s portability for me and even though other mats weigh the same, I found this one a lot easier to handle because of it’s composition.

With a standard thickness of 3/16”, the Harmony Mat provides a great base of stability for standing postures without being too “squishy.” The rubber makes for a very dense feeling mat so even though you’re not using what some would consider a thick mat, it feels like you are. The floor disappears under the mat and you are left to find your zen.

If there was a scale of 1 to 100% for stickiness, I would have to pull out the old sports cliché and say this mat gave 110%. But really, it’s that good. The moment I removed this mat from the box I could tell that this grip was in a class all it’s own. The mat virtually stuck to my hand just taking it out of the package.

It took a few sessions to get my flow with this mat and I know that sounds funny, but this mat is so sticky that it took some getting used to. For transitions between poses I’m used to pivoting on the ball of my foot for example. You can’t do that so much with this mat because where you are is where you are grounded. You need to lift your foot, hand, etc. up a bit and then move it. Not a big deal at all but it was definitely something I noticed right away.

The only downside of the stickiness is that this mat looks dirty faster than other mats because it’s just that sticky. Dust, dirt, straight from the feet show up quickly but it’s a small price to pay for an amazing yoga surface. I have gladly washed the Harmony Mat to keep it looking spiffy.

After many years of yoga practice, there are a few postures that always present a challenge and in the few short weeks of using the JadeYoga Harmony Mat I have noticed, small but significant improvements in some of those difficult postures. Whether it’s a greater confidence knowing how supportive the mat is or simply the improved alignment that the surface enables, I’m not sure. I do know that all that stickiness has helped me unstick some of the postural blocks I’ve had for some time.

The mat has a low profile texture as seen in the accompanying photo but you don’t notice it while practicing. The edges are cleanly made and the whole mat feels very substantial and of great quality.

We tugged and pulled and manipulated the mat far beyond the bounds of a yoga practice (my daughter takes great pride in product testing) and the mat held up to the rigors of a 4 year old on a mission to break it. That’s a feat in and of itself.

JadeYoga in addition to making their mats of natural rubber, a renewable resource, also make their mats in the United States and plant a tree for every mat they sell. They pay back the rubber from the trees they use by making new ones, very cool.  That’s a far cry from the PVC plastic mats that stick up your house for sure. This is almost a neutral product. In addition to this great initiative JadeYoga supports a host of other causes, one of which is Off the Mat, Into the World and if you haven’t heard of them or checked them out, it’s an incredible organization doing a lot of good.

The return policy on mats is that if it’s out of the wrapper they won’t accept returns, however, they do mention that every attempt will be made to satisfy the customer. I have a feeling there aren’t a lot of returns though 😉

The Harmony Mat comes in 8 fab colours one of which is electric orange for the people who prefer a little more pizazz in their yoga mat styling.  The rubber surface held just as strong with sweaty palms so although I didn’t take this mat to a hot yoga session, I imagine with a towel close by, this mat would be great for that and all types of yoga.

I think it could go without saying that I may have been converted. But I’ll say it anyway, totally converted, how did I not know about this rubber thing before?

If you were living in a yoga cave where they don’t have rubber mats like I most certainly was, I suggest you try this mat, it will blow your mind. Or you could win one!?